Toxins have featured prominently in pet food recalls over the past few decades. In this article, we’re taking a science-based look at some of the common culprits, how they occur, and what they mean to your dog’s health.

Salmonella is a bacterium that is known for causing the most cases of human food poisoning in the United States (1), and is the leading cause of poison-related deaths among all other pathogens (2).

Since the 1970s, it has also been the bacterium that is responsible for the most dog food recalls over the past few decades (3, 4, 5).

How Does Salmonella Contaminate Dog Food?

Salmonella bacteria naturally occur in the digestive tract of a variety of animals (6). Most cases of food contamination happen when animal feces come into contact with food products.

The risk of salmonella bacteria poisoning is decreased after heat processing, but despite earlier claims, heat does not completely destroy the bacteria, as demonstrated in a 3-year multistate outbreak study (7).

Moreover, bacteria contaminated products may also be added to dog food after the food has already been cooked and processed, resulting in food contamination (8).

Symptoms of Salmonellosis in Dogs

Healthy dogs do not usually exhibit symptoms associated with salmonellosis, and most dogs will become asymptomatic carriers, spreading the disease without showing any symptoms whatsoever (9). They may continue spreading the bacteria for about 6 weeks.

Elderly dogs, young dogs, or dogs with a compromised immune system have been observed in studies to show the following symptoms (10, 11):

Handling salmonella contaminated pet food also puts humans at risk for salmonellosis and has been labeled as a public health concern (12). A large number of cases of salmonellosis in humans was associated with pet food contamination (13, 14).

Symptoms in humans are similar to those seen in pets.

In otherwise healthy adult dogs, salmonellosis usually resolves itself in time and majority of dogs will not show any symptoms (15).

In cases where clinical symptoms are severe, or when dogs have other risk factors at play, antibiotics may be necessary as well as fluids and a short period of hospitalization (16).

You can reduce your dog’s (and your own) risk of contracting salmonellosis by always being vigilant about properly storing dog foods in airtight containers, handling all pet food with care, and staying on top of dog food recalls (17).

If your dog has a compromised immune system, you can also reduce the chance of salmonellosis by feeding a home-cooked diet and avoiding raw foods (18, 19).

Listeria is a bacterium that can cause food poisoning in humans and animals (20). Although it’s been indicated in some pet food recalls, very few cases of symptomatic listeria have been noted in dogs (21).

How Does Listeria Contaminate Pet Food?

Listeria bacteria are found in soil and water as well as in the saliva or feces of infected animals.

Listeria bacteria are destroyed by heat as well as pasteurization, so most cases of dog food recalls due to listeria contamination involve raw food (22).

Even when dogs don’t exhibit symptoms of listeriosis, they can shed the bacteria in their feces and saliva, and infect humans and other animals (24).

In mild cases of listeriosis in dogs, treatment is symptomatic and usually involves medications to target gastrointestinal symptoms.

In severe cases, hospitalization of the dog may be necessary so that IV fluids can be given alongside antibiotics. Recovery in severe cases of a dog’s listeria infection can be slow (25).

Out of hundreds of pet foods that were tested, only raw foods were found to contain listeria bacterium and it was never found in any dry dog foods or semi-moist foods (26, 27).

Therefore, exposure to listeriosis can be limited by being vigilant about toxin related dog food recalls and by being particularly careful when purchasing, handling and storing foods if you feed your dog a raw food diet. 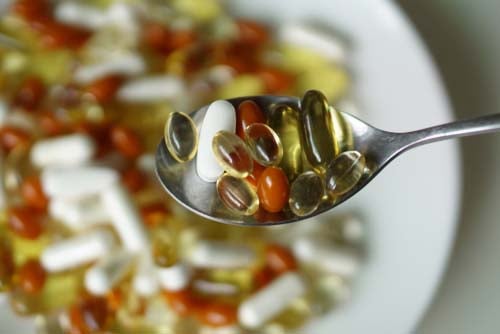 Historically, dogs used to get enough vitamin D from consuming fat stores from killed prey, but these days, they need to get it from pet food supplemented with vitamin D, since unlike humans, they cannot synthesize it from UV rays (28, 29).

Vitamin D helps to maintain calcium and phosphorus levels in the body, but too much vitamin D causes toxicity in dogs, which can then cause death (30).

How Do Elevated Levels of Vitamin D Contaminate Dog Food?

Elevated levels of vitamin D occur in pet foods as the result of human error, for example, errors in calibrating machinery, a failure to properly mix vitamin pre-mixes before applying them to kibble, or feeding a raw diet that is not properly balanced (32).

Symptoms of vitamin D toxicity are seen approximately 8 to 48 hours after ingestion and include (33, 34):

Treatment for vitamin D toxicity depends on when the toxic dose was ingested. If seen within 6 hours, vomiting is induced and activated charcoal is used to decontaminate the gastrointestinal system (35).

After 6 hours, treatment requires medications to block calcium absorption so that the excess calcium in the body can be eliminated by the kidneys (36). Supportive treatment is also necessary and includes administering fluids and restricting dietary intake of calcium.

You can reduce your dog’s risk of vitamin D toxicity by being vigilant about dog food recalls. If you are feeding your dog a raw diet or homemade diet, or supplementing their diet with vitamins, be sure to have your vet look over your plans to ensure that you are not giving them an excess of vitamin D (37, 38). 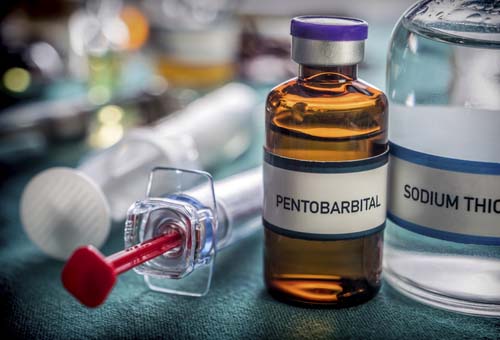 Pentobarbital is a barbiturate with anesthetic and sedative properties (39).

Used in lesser quantities for controlling epilepsy and rarely used as an anesthetic, Pentobarbital is best known for its use as a dog’s euthanasia drug (40).

How Does Pentobarbital Contaminate Pet Food?

In past dog food recalls, many pet food companies have explained Pentobarbital contamination as the accidental contamination of the meat supply. Animals that were euthanized were slaughtered and their meat was accidentally packaged and shipped alongside meat that was intended for pet food (41).

Symptoms of Pentobarbital Toxicosis in Dogs

Dogs that have consumed Pentobarbital may exhibit the following symptoms (42):

In the more recent cases of Pentobarbital food contamination, the FDA stated that levels of the drug were low enough that dogs were unlikely to show symptoms of exposure.

Pentobarbital contamination of pet food is very unusual, but when it does happen, you can limit or avoid your dog’s exposure by keeping a close eye on current pet food recalls and by feeding a dog food brand that has no record of this type of contamination. 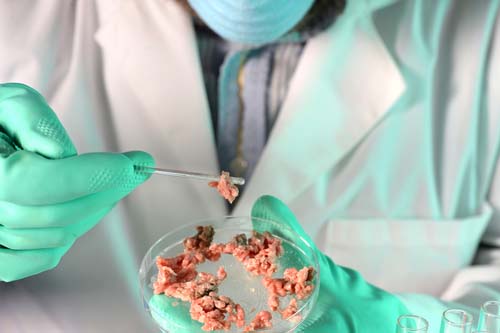 E Coli (Escherichia coli) is a common bacterium that lives in the digestive tract of most warm-blooded mammals (44).

There are various types of E Coli bacteria, some of which are beneficial and others that can be toxic (45). Colibacillosis (infection with E Coli) occurs when E Coli bacteria is ingested by the dog.

E Coli enters the dog food supply through the contamination of water or food ingredients by feces (46).

It should also be noted that E Coli bacterium can be sometimes passed from a mother to her puppies through her milk or in utero (47).

Symptoms of E Coli are seldom seen in dogs, but in some cases, elderly dogs, young dogs, or dogs with a compromised immune system may show the following symptoms quite suddenly (48, 49):

Even if a dog does not show symptoms of E Coli poisoning, they may be a carrier of the bacteria and pass it on to other pets and, in rare cases, to humans (50).

It is also possible for humans to contract E Coli by handling contaminated pet foods (51).

Treatment for dogs with E Coli includes IV fluids and electrolytes to replenish fluids lost through diarrhea (52). Antibiotics may also be administered to treat the bacterial infection.

In dogs exhibiting signs of E. Coli toxicosis, treatment should be sought right away as delaying treatment can result in blood poisoning (53).

You can reduce your dog’s (and your) risk of Collibacillosis by being vigilant about tracking dog food recalls and always picking up poop after your dog when they use the bathroom. Good hygiene practices related to dog care are also important to keep all family members infection-free in your household. 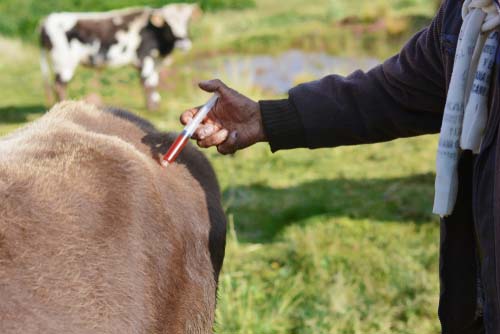 Beef thyroid hormone is a naturally occurring hormone in livestock (54).

When specific sections of livestock meat (cuts from the throat when the thyroid gland has not been completely removed) are used in food or treat production, beef thyroid hormones can be particularly concentrated (55).

Past recalls for high beef thyroid levels have included both dog foods and dog treats (56).

When dogs ingest high levels of beef thyroid hormone, it pushes their thyroid to work overtime (57). This can result in the following symptoms:

If exposure to beef thyroid hormone is limited – for example, one or two dog treats from a tainted bag – symptoms will generally resolve themselves when the dog treats are discontinued and no treatment will be needed in such cases.

If exposure has been prolonged, dogs may develop hyperthyroidism before going on to develop more serious side effects and even death (58, 59). In these cases, treatment is focused on balancing thyroid hormone levels in the canine body with thyroid medications like Levothyroxine and managing symptoms.

You can reduce your dog’s as well as your own risk of beef thyroid toxicity by being vigilant about tracking pet product recalls, by feeding human-grade dog food and dog treats and meat (if you feed raw), and always knowing what is in your dog’s food. 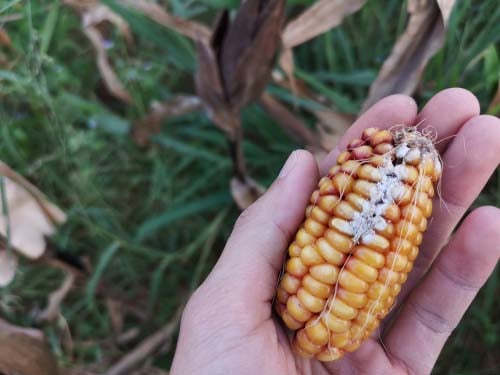 Mycotoxins are natural toxins that are produced by certain types of mold that have an affinity for grains (60). There are various types of mycotoxins, but there are three mycotoxins of particular concern for dog owners – aflatoxin, fumonisin and deoxynivalenol (also referred to as vomitoxin, or DON).

How Do Mycotoxins Contaminate Dog Food?

Mycotoxins contaminate pet food most often through improper storage of ingredients like corn (61). Molds that thrive in dry conditions take hold in these ingredients while they are being stored and the mycotoxins that are produced by that mold thrive (62).

Rather than having the moldy corn disposed of, the FDA approved for moldy corn to be mixed with “the good corn” so long as “safe levels” of mold are maintained. A study found that 98% of pet food samples taken off store shelves were contaminated with mycotoxins.

Mycotoxins are not limited to grain based ingredients in dog food; they are also common in other foods like cheese, bread, nuts, compost, and spoiled foods (63).

Symptoms of mycotoxin poisoning in dogs may include (64):

A dog’s mycotoxin poisoning must be treated immediately, and treatment must be aggressive (65). Treatment includes pumping the dog’s stomach or inducing vomiting and giving activated charcoal to absorb any toxins in the body (66).

Tremors and seizures are treated with benzodiazepines and in severe cases, IV fluids and electrolytes or even a blood transfusion may be necessary (67).

You can reduce your dog’s risk of mycotoxin poisoning by being vigilant about what you feed the dog, and always tracking dog food recalls as well as feeding dog food brands from companies that are transparent about their sourcing.

It’s also important that you always store all pet food properly in an airtight container away from moisture and direct sunlight.

How to Keep Dogs Safe from Pet Food Toxins

If you’re always tracking pet food recalls, being aware of which foods should not be fed, and generally buy only top rated foods from companies that are transparent about their ingredients and sourcing, you should be fine in 99% of cases.

You should also do your part in keeping your dog’s food free from contamination by investing in an airtight dog food container and making sure that it is stored away from moisture, sunlight, and any other sources of possible contamination.