You see, in Kastamonu, Turkey, it isn’t unusual for “dog owners” to abandon their pups in the dumps and mountain areas. And now that people know of Sebahat’s kindhearted actions, they’ve started leaving pups there on purpose.

It was a no-brainer: Sebahat knew she couldn’t just leave the pups. At the same time, she also knew the improbability of saving all the homeless pups right off the bat.

So instead of panicking, Sebahat set out her priorities. She would start by going to the areas where the abandoned pups were barely surviving. 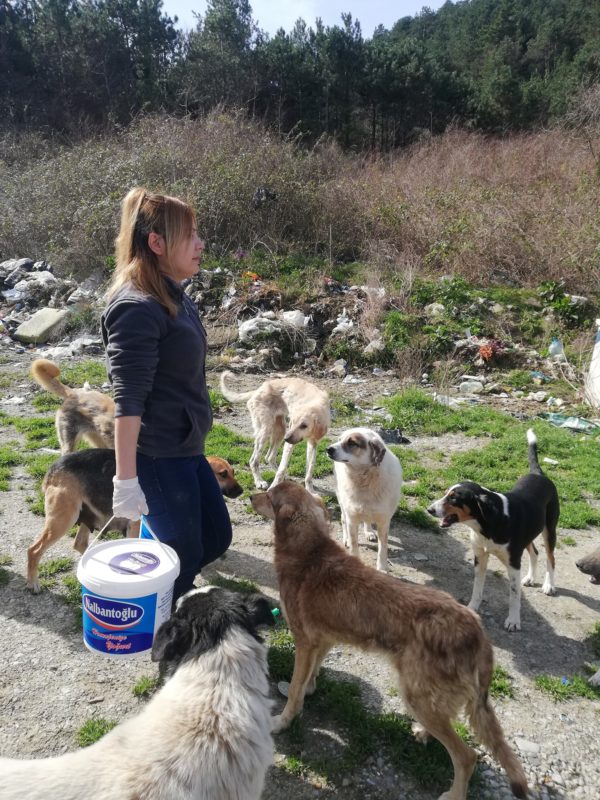 Sebahat supplies the homeless pups with food, water, and shelter on a daily basis. (Photo by Sebahat Hanifeoglu)

She started the journey by waking up at the break of dawn every morning. She would then gather blankets, water, and food, and start the trek into the mountains to search for new pups.

Of course, the pups loved to see their savior – and not just because she brought them food and water, or tried to build them better shelter. The pups are always excited to eat the food Sebahat brings. (Photo by Sebahat Hanifeoglu)

The pups knew that Sebahat truly cared for them, and they loved her for the companionship she offered. And after being cruelly abandoned by previous “owners”, it was only right that the pups finally had happiness in the form of a loving human.

The journey didn’t end there. To this day, Sebahat visits 5 areas on a daily basis to give abandoned pups everything she has (and more).

Despite her actions to help the homeless pups, Sebahat still didn’t like leaving them out in the open with no protection. Fortunately, this sparked an idea that would begin a slow (but necessary) change.

With the help of a few volunteers, Sebahat started building sheds to give the pups some shelter. 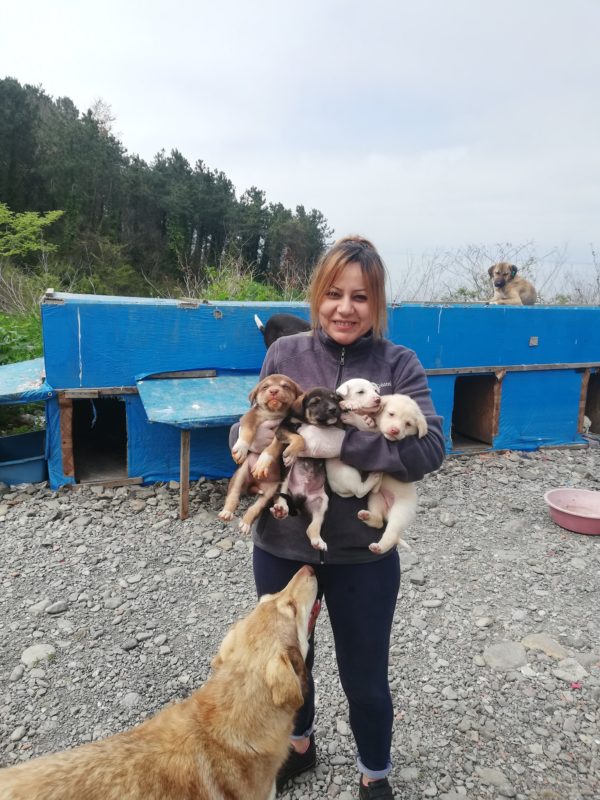 With the help of some volunteer friends, Sebahat builds sheds for the pups to sleep in. (Photo by Sebahat Hanifeoglu)

Unfortunately, their kind actions were accompanied by the selfish actions of others. Not only would people abandon their pups, but some would even steal the sheds that provided the pups with shelter.

And some had even gone as far as to destroy them. 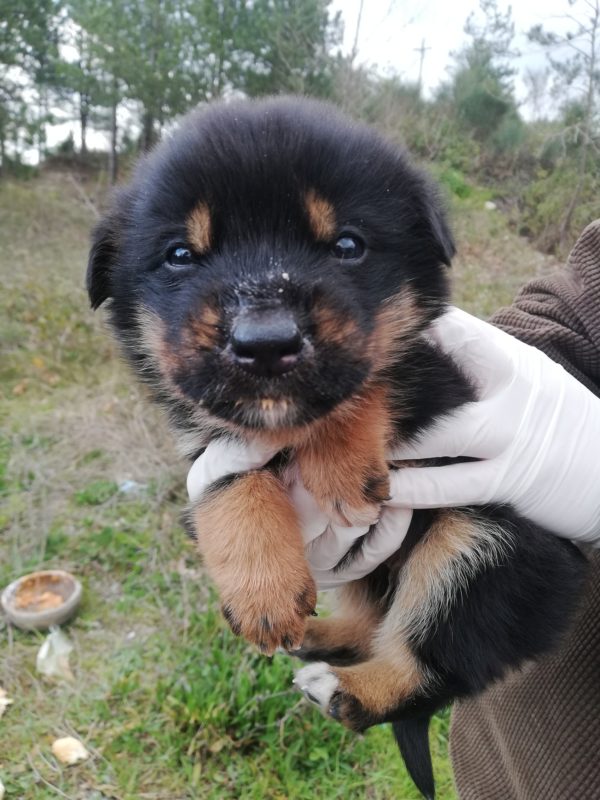 Sebahat struggles daily to save the lives of puppies like the one shown in this picture. (Photo by Sebahat Hanifeoglu)

Sebahat and the pups are forces to be reckoned with though. The cruel actions of others have only made them more determined to beat the odds.

“I’m just doing what we should all be doing,” Sebahat said. “And I’ll never give up.”

The future definitely looks promising for Sebahat and her pups. With the help of Dumpster Doggies, Sebahat is hoping to build an emergency shelter for the pups – a shelter that can’t be stolen or destroyed by cruel third parties. 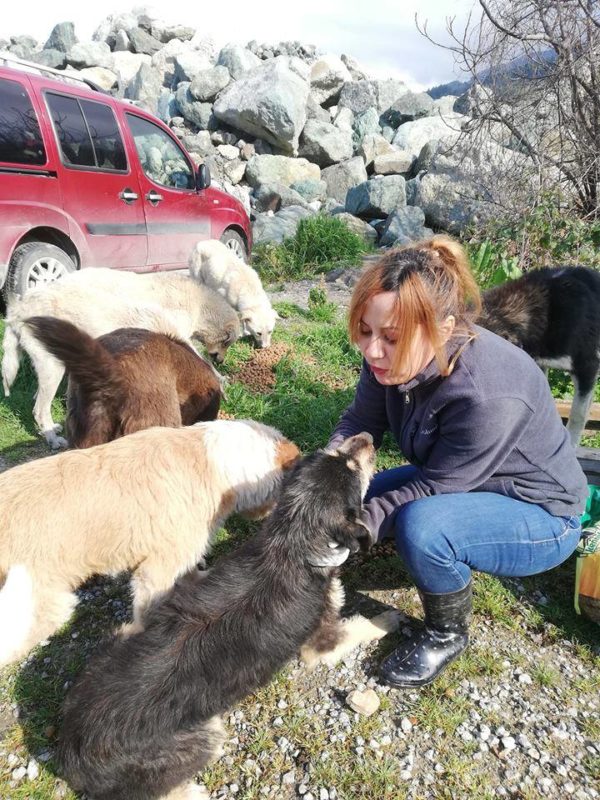 Sebahat is always flocked with hungry pups when she arrives on the scene. (Photo by Sebahat Hanifeoglu)

With any luck, Sebahat and Dumpster Doggies will accomplish their goal, and the homeless pups will finally have a safe place with lots of human interaction and love.

A Story of Hope

The inspiring efforts of Sebahat and her friends have not gone unnoticed. In April 2019, The Dodo shared one of her videos on their Facebook page and uploaded another video to YouTube.

Even better: at least one of the pups found a forever home.

After Sebahat and her friend, Sadet Yilmaz, rescued a pup called Nazli, they immediately started to examine her. Soon after, the pair realized Nazli was blind. In response to the discovery, Nazli was sent to a clinic in Turkey’s capital by Dr. Ender Selcuk. 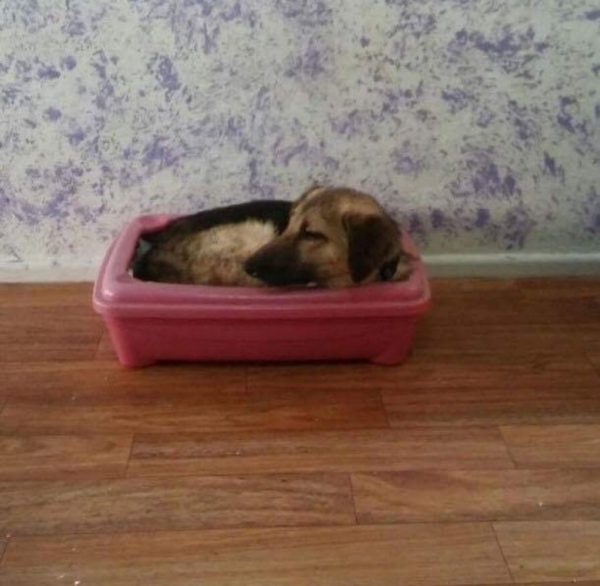 Nazli was discovered to be blind. (Screenshot, Animal Rescue Guide)

From there, Nazli moved into a foster home with the veterinary nurse who helped treat her. Not long after, the Rocky Mountain Animal Rescue found the pup a forever home in Canada’s Sunshine Coast Regional District.

Thus, the once timid pup braved the long flight to Canada. And now, thanks to Sebahat and friends, Nazli is living happily in her new forever home.

Thank you Sebahat for everything you’ve done and continue to do for these pups! Visit Sebahat’s Instagram for more information on her fight to save the homeless pups of Turkey.