Do you use baby talk when you’re showing your pup some love? A lot of us express our love to our dogs with a puppy-dog or baby voice. An animated, high-pitched voice helps human babies learn the language, but dogs aren’t going to speak (we wish!) So, why talk to them in a baby voice?

Well, if you use baby talk, we’ve got good news for you: science says dogs respond to it.

Before we get into the specifics, let’s level set. Think about the way you talk to a baby less than a year old. Do you use your regular tone or do you modify your voice?

This is what we mean when we reference baby talk: speaking to babies (or animals) in a high-pitched, exaggerated way. This way of speaking is said to help infants learn to speak by making sounds clear. Baby talk is also said to strengthen the bonds between parents and children. Humans aren’t the only ones who do this. Apes speak to their babies this way, too.

How does this relate to dogs?

The research on baby talk comes from Animal Cognition. In their study, the scientists asked two people to sit with speakers in their laps that played recordings of their own voices.

Alex Benjamin, a Ph.D. candidate at the UK’s University of York and a co-author of the study, recruited 37 dogs from York, England. They brought the dogs into a room (on leash) with the two people. Then the dogs heard two types of recorded speech: a normal, conversational tone and “dog-directed speech.” This dog-directed speech was what we’ve defined as baby talk. In the recording, the baby talk used words relevant to the dog, like “treat” and “walk.”

“Dogs, we think, are very sensitive to changes in acoustic properties—things like the gender of the person, the size of the person—so that’s why the recording of the speech always matched the person that was holding the speaker,” Benjamin told National Geographic.

Benjamin explained the results, “The dogs spent more time looking toward the person using dog-directed speech [baby talk]. And they chose on average to spend more time with the person who had recently been producing this sort of speech register.” 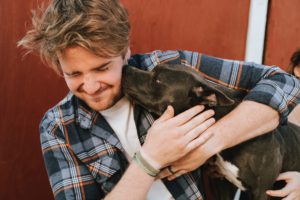 The scientists wanted to make sure that the dogs weren’t just responding to hearing words they recognized, as opposed to preferring the baby-talk. So they conducted a second experiment.

This time the dogs heard the recordings, but the baby talk and subject matter were inconsistent. So, on one recording, the baby talk was paired with every day human stuff, not dog-relevant topics. In the second recording, normal conversational tones were used to talk about things dogs prefer, like walks and treats.

The researchers found that in this experiment, the dogs had no preference. This showed that the combination of baby talk and the dog’s favorite words was needed to keep their attention.

“When we mixed-up the two types of speech and content, the dogs showed no preference for one speaker over the other. This suggests that adult dogs need to hear dog-relevant words spoken in a high-pitched emotional voice in order to find it relevant.”

The study doesn’t tell us if this preference is learned or puppies are born with it. This is, of course, the classic nature vs. nurture question. Maybe they like high-pitched sounds at birth, or maybe they learned a positive association with baby talk because it’s often used when a dog gets positive attention or a treat.

People with dogs, veterinary professionals and rescue workers can use this knowledge with their canine friends. If they use baby-talk when interacting with dogs and talking about things of interest, the dog will pay attention. And, perhaps, the dogs will understand the interaction better.

And the next time someone questions you for using a baby voice to communicate with your pup, tell them science says it helps your dog better understand you.