Actor, Justin Theroux adores dogs. Not only is he is a well-known rescue advocate, he is also the doting dad of Kuma, a blue Pibble and Hurricane Harvey survivor.

One look at his Instagram feed proves Kuma has Theroux’s heart in her paw, so it’s no wonder he chose her as his date for the New York premier of Lady And The Tramp.

Theroux voices Tramp, a mixed-breed street dog, in the live-action remake of the 1955 Disney film. As his plus-one, Kuma got to ride along in the limo, pose for photos on the red carpet, and even had her own cushy seat in the theater.

At first she was excited to see a movie starring dogs – especially when she heard her dad’s voice coming from real-life rescue dog, Monty.

Things got a bit tense when the dog catcher came on the screen.

Kuma had to drink away her nerves…

And got her tummy rumbling!

After drying his tears of joy at the outcome of the movie, Theroux treated Kuma to her very own candle-lit dinner of spaghetti and meatballs…. 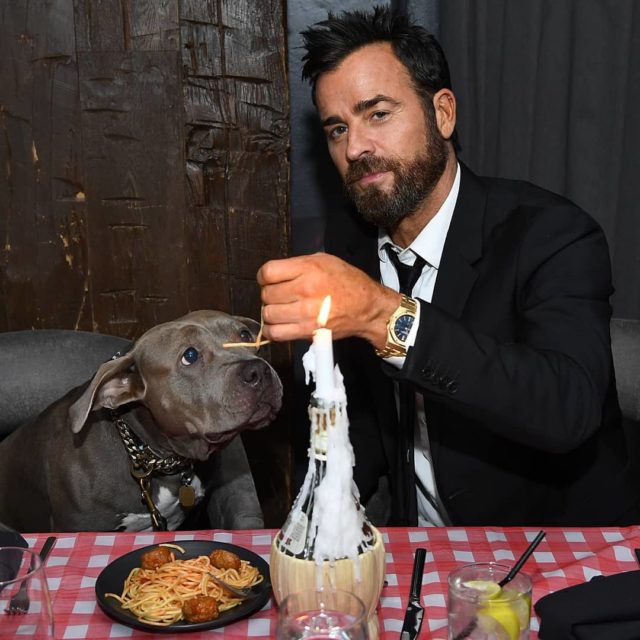 Complete with a recreation of that famous kiss! 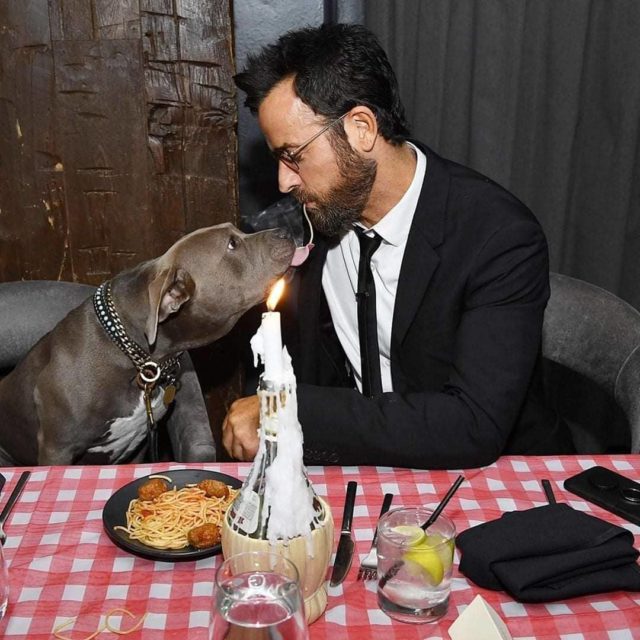 It was quite an exciting night for a pooch like Kuma. Just two years ago she was picked up as a Texas stray in the days following Hurricane Harvey. At the time she was almost completely bald from mange.

Saved and nursed back to health by A Chance To Bloom Dog Rescue, Kuma was adopted into a life of fame and fortune by her celebrity dad. That’s one lucky pup!

Much like the tides have turned for Kuma; Monty, the pooch that plays Tramp also has quite the Cinderella story. He was pulled from a New Mexico kill shelter by HALO Animal Rescue in Phoenix, Arizona.

Mark Forbes, a Hollywood animal trainer saw something special in the scruffy mixed breed. He and the Lady and the Tramp filmmakers knew they wanted to rescue as many of the film’s canine stars as possible.

When they saw Monty’s photo online, they knew he was perfect for the role of Tramp.

Monty was young (about 8 months at the time of his adoption), intelligent, playful, and responded positively to Forbes’ training – just what he was looking for in his new canine star!

Check out Monty (voiced by Theroux) and some of his pals in action in the official Lady and the Tramp trailer! The movie premiers in theaters on November 12.