Caleb Snapp is a 12th grader at Lubbock-Cooper High School in Texas. He is legally blind but that doesn’t stop him from totally rocking out in the school’s marching band. Caleb plays the bass drum and has, quite possibly, the most adorable bandmate by his side.

A Dog That Never Misses a Beat

Meet Grit, Caleb’s seeing-eye dog. While Grit may not technically be on the field with his boy Caleb during the halftime show, he’s definitely on the sidelines cheering him on. According to Everything Lubbock, Caleb retains minimal vision- he can only see directly in front of him. Caleb has no peripheral vision and is also unable to see below, which is where Grit comes in. The adorable Yellow Lab helps Caleb navigate the halls at school. As you can guess, Grit is quite a popular student. 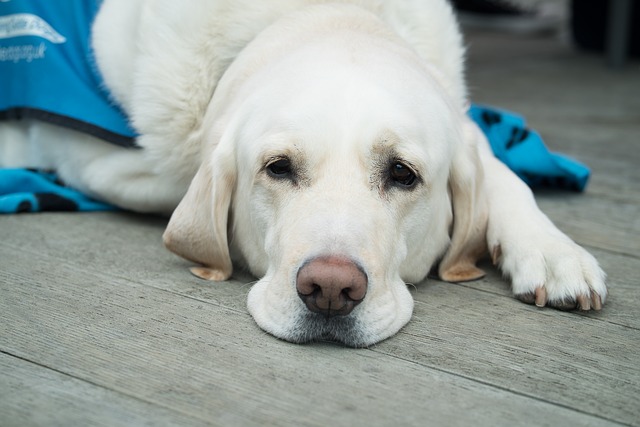 Caleb had always been in the pit of the marching band where he played the marimba. This had allowed him to stay mostly stationary but Caleb decided he was ready to go out on a limb and try something new this year. John Rogers is the percussion coordinator of the Pirate Pride Marching Band. He’s known Caleb since he was in 5th grade and he describes Caleb as a hardworking and determined young man.

“I’m the same as everyone else. There’s no difference,” insists Caleb.

A Perfect Match for Marching and Music

The ambitious high school senior and his family had applied for a seeing-eye dog from Guide Dogs for the Blind. Caleb was approved just 8 months ago and was placed on a waiting list. Once he was matched, Caleb flew to Portland, Oregon where he stayed for two weeks while he and Grit got to know each other.

EXCITING UPDATE: YLM Grit is officially in class at the Oregon Campus. Grit will be graduating Saturday, July 27th. Congratulations to Remy and Grit. ??????????????????

“He has been a full-time cane user and we are trying to get him prepared for college. A cane helps him a lot but it doesn’t give him quite the independence that he needs to, say, go to college and live on campus,” said Caleb’s mom.

Grit stays faithfully by Caleb’s side. He is teaching his human how to become more independent each day. And as for Caleb’s classmates, of course they don’t complain!

What’s Next for Caleb and Grit?

Caleb hopes to graduate this year and attend South Plains College where he plans to study in their sound technology program. Just one question remains…

Who is going to take home the title of Prom King: Caleb or Grit?