Social media is overflowing with stories of missing dogs. Isn’t it nice to hear some good news every once in a while? We especially love it when one of our service members has a story with a happy ending! This happy ending happened in the heartland of America and it’s pretty incredible.

A veteran in Kileen, Texas was heartbroken after his Pit Bull was lost. Hades went missing back on October 21st when he left his yard to play with another dog. The adorable pup with a half white and half brown face was nowhere to be found. 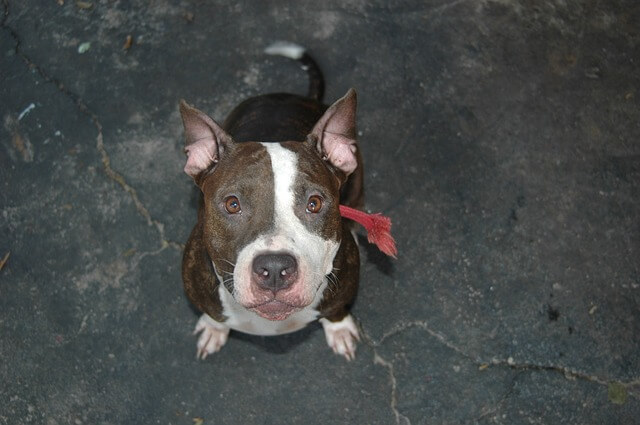 Snuggles That Offer Security And Safety

Horn has difficulty sleeping at night as a result of his service to his country. Hades offers him a sense of security in the form of snuggles and endless love. When he went missing, it seemed as if Horn would never find peace again.

“It’s like he knows. He knows when I’m going to go through something and he’s just there,” Horn said. “My world is gone without him here. I need him.”

Hades’ heartbroken dog dad described him as playful and overflowing with love. His personality was one that couldn’t go unnoticed.

“He’s very playful. He loves to lick. He will lick you to death,” he said.

The seasons changed and the holidays were quickly approaching. Sadly, there was still no sign of Hades. Horn kept a close watch on social media for any signs of hope. Some Ring cameras caught footage of Hades wandering through yards but there were no substantial leads. Horn hoped that someone had taken Hades into their home as the temperatures dropped. Even though he hoped Hades was warm and cozy in someone’s house, he still wanted him to come home. Horn needed him to come home.

Good News Came Just In Time For The Holidays

The good news finally came nearly one month after Hades went missing. Someone had found Hades and kept him safe and warm. But, they took off his collar and rabies tag and wanted to keep him as their own.

A woman learned about Hades after Horn asked the public for help. She contacted Horn and he was eventually able to convince the people to give Hades back!

“I want to thank every one of you for helping me out, I greatly, greatly appreciate it,” Horn told kcentv.com. “Thank y’all from the bottom of my heart.”

Welcome home, Hades! We love it when a story has a happy ending (and tummy rubs)!