Most of us consider ourselves polite people in polite society. We greet each other with smiles, kind words, head nods and handshakes. Our best friend, however, has a different sort of greeting. They choose to sniff bums. I would guess that most people with dogs conclude their pups do not have manners. But there’s more to the story. What does your dog get from sniffing butts?

Since our canine friends are unable to shake hands, nature has provided them a method of getting to know each other and a way to size up the other dogs in the neighborhood. Dogs lead with their noses and sniffing is also seen as a survival tool. 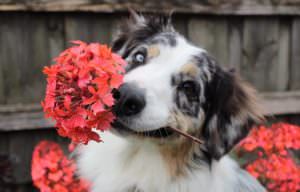 What’s in a scent?

Everyone smells the world around them. Many love the fragrance of freshly cut flowers or the aroma of great food being cooked. Bread hot out of the oven is a personal favorite. On the other hand, consider what your dog prefers. Why bums? Let’s take a closer look.

It is a well-known fact that dogs have quite advanced sniffers. Of all the five senses: vision, touch, taste, hearing, and smell, the scent is the most developed in the canine. Dogs can distinguish the scents of people, family, and other animals. Canines also have a remarkable organ known as Jacobsen’s organ. It is a collection of specialized nerve cells that are located just inside the nasal area and travel through the roof of the mouth behind the upper incisors (front teeth). The nerves in this organ go directly from the nose to the brain and provide a second way the canine has a superior sense of smell. The scent receptors here are very sensitive and Jacobsen’s organ works in conjunction with the dog’s nose to achieve the advanced level of smell that makes a dog be born to sniff. 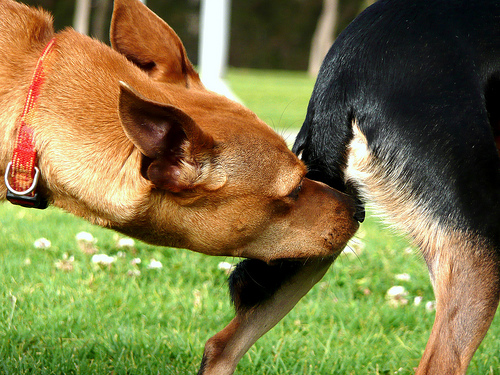 But why do dogs sniff bums?

We see dogs sniffing fire hydrants, grassy areas, our clothing and shoes, and more. But, when they sniff a bum, they find many identifying odors, just like fingerprints do for humans. (Note: if you have a weak stomach for anatomy, you may not want to read ahead.)

The odors from the genitalia as well as glands in the rear of the dogs are important to the canine. One particular set is anal glands. These are two glands that sit at the 4 and 7 o’clock positions of the anal/rectal area. These glands make a thin liquid that has a unique odor for each dog. This liquid is generally released when the pup passes stool and is usually not detected by humans. But other dogs detect the unique odor. Dogs have the ability to ignore the odor of the feces and concentrate on the other individual odors each other dog possesses. 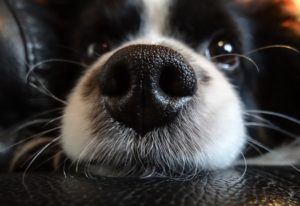 What is there for dogs to gain?

Odors from other dog’s rear ends and other scents allow your pup to identify a dog they come in contact with. Even though dogs can sense if another dog is safe to approach by tail wagging or hair elevated on the back of another pup, they also use being able to approach a bum as a tool in identifying friend or foe.

They can tell if this is someone they have met before. Whether they are male or female. If they are healthy or ill. Dogs get up close and personal to gain all of this information. They can also determine if the other is interested in romance. As mentioned, sniffing is a quick way for the dog to know all is okay and serves as a survival tool as well as a tool to help dogs get along with each other. Another positive effect is that sniffing a bum actually has a calming effect on dogs. Canines have great memories and can remember even faint scents for long periods of time. This makes their ability to smell useful when they use their noses for good. Dogs use their sense of smell to identify illnesses such as seizures and diabetes. Dogs can detect bodies buried in snow, as well as the rubble of collapsed buildings. Search and rescue dogs find lost children by sniffing just small articles of clothing. Talented dogs are even used to detect bombs in war zones.

While it is true, long-nosed dogs are known to have a better sniffer than the short-faced ones, the talent of smell is shared by all dogs. Amazingly, dogs can distinguish the scents of people, family, and other animals. 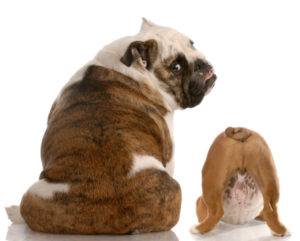 Should you do something about this behavior?

Some people with dogs elect to train their pups to not sniff. This is an acceptable way to handle a pup if you think yours is too nosy, or it may not be safe to approach a certain animal. But maybe we need to see our dogs as having a fun fragrant time when they sniff everything along their pathway.

Embarrassing, maybe, but that’s what dogs do.