Getting your dog out the door for daily exercise will always be a step in the right direction when it comes to their health and happiness.  There is a way, however, for your dog to get even more enrichment from their regular walk around the block.

While you’re busy looking at the scenery, your dog’s nose is working overtime. They walk a few feet before stopping to sniff, and then they take a few more steps to find something else worth smelling. It’s tempting to tug on the leash to keep them moving in a forward direction, but a worthwhile dog walk isn’t always measured in miles or minutes. Every now and then, it’s important to let your dog stop and smell the roses…and the fire hydrants, and that bush, and maybe even that fence post way over there.

A Dog’s Sense of Smell

While humans are mostly visual creatures, dogs are all about smells. They have millions more olfactory sensors than humans do, and they even have an extra organ, the vomeronasal organ, on the roof of their mouth for the purpose of processing smells. Their long snouts are ideal for reading “scent mail,” and they learn about the world by putting their nose to anything that seems interesting. Every tree, light pole, and pant leg is potentially covered in informative smells.

You can put your nose to the same tree your dog has been sniffing for the past minute and get nothing but a whiff of woodsy bark, but your dog picks up on a lot more. They can tell another dog recently passed through the area and approximately how long ago they were there. Not only that, they can tell the dog’s gender, what they like to eat, and what kind of mood they were in.

“When in a new territory, a dog can sniff a tree and determine what other dogs live in the neighborhood. They can smell a visitor’s pant-leg and get a good impression of where the person lives and whether he has pets at home.”

The team at Ahimsa Dog Training compares asking a dog to not sniff during a walk to be the same as asking a person to walk around wearing a blindfold. Dogs rely on their noses to tell them important things about the world, and the time they spend on their walks is time spent catching up on the neighborhood news. The Mental Benefits of Sniffing

All dogs need regular exercise to stay physically healthy. Going on walks is especially important for high-energy dogs. Without somewhere to put their building enthusiasm, their surplus energy bubbles over and turns into unwanted behaviors like chewing and being generally unmanageable. A long walk or run seems like the only way to deplete a young dog’s abundance of energy, but physical exercise isn’t the only way to satisfy their needs. If you really want to tire out your dog, you need to enrich both their body and mind at the same time.

Sniffing a particular scent and then interpreting the accompanying information is the canine version of a mental work out. They won’t be running miles or building up muscles, but being mentally engaged is equally important.

“The effort it takes to sort and identify individual elements of an odor requires a lot of work. It’s a little like us trying to solve a tough logic problem—the required mental energy is tiring.”

Getting your dog to exercise their brain will stave off cognitive decline once they reach old age and keep them from chewing up your shoes when they’re young and eager for entertainment. A walk where they’re allowed to sniff until they’re mentally content is the perfect opportunity to address both your dog’s physical and mental needs. 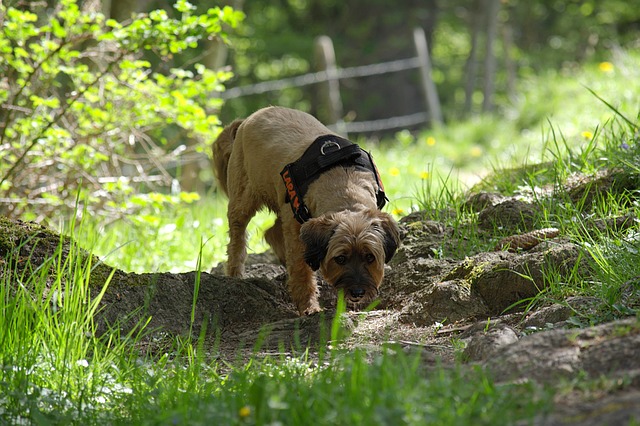 Dogs are dependent on their owners, and along with regular meals and a place to call home, that arrangement comes with a good deal of confinement. Their movements are restricted by fences and leashes, they sit when they’re told to sit, they eat what they’re told to eat, and they walk when their owner decides it’s time. They’re even told when they’re allowed to go to the bathroom.

Your four-legged family member has almost no control over their life, and that feeling of constantly being constrained can play its toll on their mental health. Research shows total lack of freedom often leads to stress, anxiety, and depression. According to Pet Dog Trainers of Europe,

“Being able to make choices gives a dog self-confidence and a feeling of self-reliance. If they have no choices at all, they don’t have the possibility to avoid or relieve stress. Studies have shown this can lead to depression and learned helplessness. A dog in this state has ‘shut down’ and no longer makes any attempt to improve his situation.”

It’s not always a bad thing for people to guide their dogs through life. Most of the time, it’s a matter of safety—like not letting your dog run off-leash in an uncontrolled area. There are also situations where a dog’s decision would be inappropriate—like their decision to pee on the couch or rummage through your neighbor’s open garage. 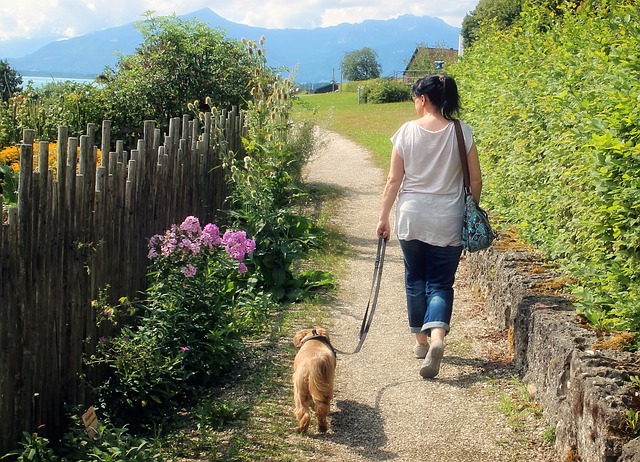 Too much control, however, can negatively affect your dog. A daily walk is your chance to give your dog some slack and let them make decisions on their own. If they want to spend five whole minutes sniffing every inch of a fire hydrant, let them. It’s a small decision in the grand scheme of things, but the chance to choose will do a great deal of good for their mental health. If you spend every step of every walk forcing your dog to heel by your side and making every decision on which way you turn, you could be adding to their stress when you want to be relieving it.

If your dog had their choice all the time, they’d probably zigzag their way through the neighborhood stopping every few feet and going wherever their nose decides to take them. That’s okay sometimes, but even the best pet parents can’t accommodate a long sniff-filled walk every day. If you only have time for a quick trip down the road and back, do your dog a favor and focus on mental enrichment instead of distance traveled. Depending on your dog’s abilities, a 15-minute walk won’t do much to tire them out physically, but that same amount of time spent sniffing and processing scents will satisfy their need for mental enrichment.

Remember, walking the dog is supposed to be about the dog, not you. It’s okay to hurry them along sometimes, and running is better when you’re not stopping every five feet, but don’t underestimate the benefits of a good “sniff walk.”