A Florida woman turned a “stray” over to her local shelter. The poor baby was absolutely emaciated. Bones protruding, dull eyes, weak, and probably near death. She turned the dog in, having done her civic duty, and went about her busy day.

The staff at the Humane Society in Sarasota took a first step in attempting to identify the pup. Imagine their surprise when they found that the dog was indeed microchipped and the listed owner was Alexandria Drew, the very woman who surrendered him as a stray.

I guess we should all be grateful for the fact that this woman surrendered the dog before it was too late, but it’s pretty difficult to summon up any appreciation for a person who nearly starved her dog to death.

When questioned as to why she didn’t feed Richter she claimed that she was too busy. Because, you know, putting a scoop of food in a bowl takes all of 15 seconds or so. She doesn’t have that kind of time.

She claimed that she couldn’t afford the $30 surrender fee which is why she didn’t take the dog in sooner and why she lied about him being a stray.

By all accounts the animal lived in a “cage” and based on his physical condition it’s not a stretch to imagine that she completely ignored him. The suffering of this helpless creature is incomprehensible. Thank goodness, Richter began receiving proper nutrition and care by the Humane Society and began recovering right away. 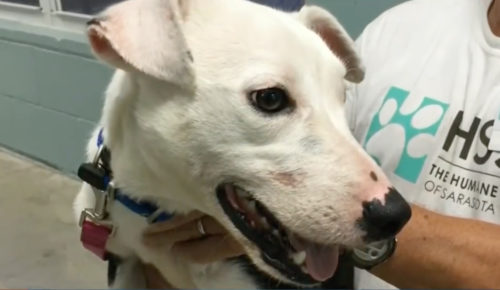 How does a human being look at another living being day in and day out, locked in a cage without proper food or attention, and not muster up enough compassion to at least set it loose to scrounge for some hand outs? How did she sleep at night with that innocent animal suffering under the same roof? It just boggles the mind and leaves one feeling sick for the state of some people’s hearts.

Drew was arrested and charged with animal cruelty but some locals think that doesn’t quite go far enough. Outraged, they are calling for an eye for an eye. Stories like this almost make that kind of punishment seem completely justified.